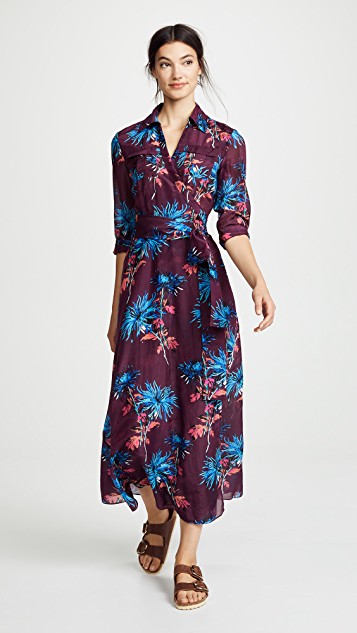 Diane von furstenberg, a Belgian American fashion designer, is best known for her iconic wrap dress designs.  She is the wife of Prince Egon of Furstenberg and married him in 1962. A year after marriage she started to design dresses. Post her divorce from Prince Egon in the year 1972, she has continues to use his family name and is currently married to Berry Diller since 2001. In 1974, she introduced the Wrap Dress in knitted jersey, which has gone ahead and revolutionised the American fashion scene.

Diane has her fashion company, Diane von Furstenberg (DVF), a global luxury lifestyle brand, now available in over 7 countries and 45 free standing shops worldwide. She is also the president of the Council of Fashion Designers of America (CFDA), a position she has held since 2006 In 2014, she was listed as the 68th most powerful woman in the world by Forbes, and in 2015 was included in the Time 100 Icons list by the Time magazine.

Diane von furstenberg wrap dress is a unique outfit with a front close formed by wrapping one side across the other, and knotting the attached ties that wrap around the back at the waist or fastening buttons. This forms a “v”shaped neckline. A faux wrap dress resembles this design, but differs from it since it the ends are alrady fastened and is to be worn as a single piece with no front opening.

Today’s women want a different fashion statement for themselves and wish to stand out of the crowd. They always want to look different and this has been made possible by wearing something like a Diane von furstenberg wrap dress. Her designer collections also include long skirts, gowns, patch work dresses, one side cut till the knee, side cuts, center cut till to the stomach, long sleeves, short sleeves, sleeve less, one side sleeve is long and other side is short, and shoulder less dresses, and are extremely popular among celebrities across the world.