Home / Uncategorized / Bowler Hat Has Never Been Out Of Fashion 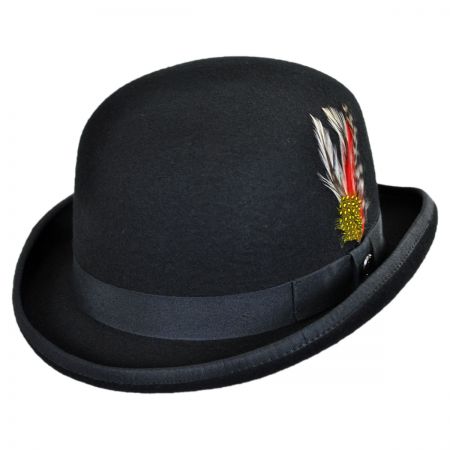 Bowler Hat Has Never Been Out Of Fashion

The bowler hat also known as ‘Bob’ hat is a fashion item of Britain and America that came to India with the British Rule. The origin of it dates back to 1849 were it was used by the rich society of the western hubs.The idea of this classic head cover is of Edward Coke who was a Britisher. It became a popular fashion accessory in USA and UK. Its popularity can be measured by the fact that Sir Winston Churchill was one of them who took the pleasure to wear that hat.

It was used as a helmet or head cover in army and was equally applied in formal and informal looks. Bowler hat actually never went out of fashion. The truth is, it can never be. The reason is its simple yet classic design which will always add that charm to its bearer.Even today we can witness its presence in various parts of this world. Bowler hats looks perfect with jeans and shirts, suits and even sweatshirts. So how can we say adieu to it?

A white shirt,black jeans and a black plain bowler hat. Just imagine, that guy would look so heartthrob. If you cannot still guess what a bowler hat is, then remember the great Charlie Chaplin. His hat, the bowler hat. Another amazing fact regarding this foreign fashion is that its becoming an accessory for females to. Bowler hats were actually unisex. They were to be used by both male and female. Its just that we maidens forgot to use them. Well, its never too late. You girls can even enhance your look with these amazing hats. You can even find the proof of this in some advertisements.

So for all those who keep themselves updated with the latest fashion must have bowler hat in their wardrobe otherwise you’ll miss the fun.